Tell Your PA Representative to Vote Against Harmful Constitutional Amendments! 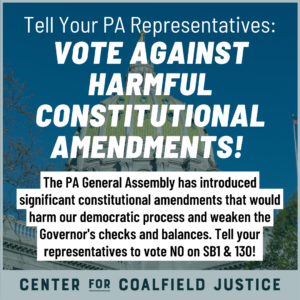 The Pennsylvania General Assembly passed several potential constitutional amendments in the last legislative session, including voter identification and election auditing requirements and a regulatory process change. Together, these amendments bring great harm to our democratic process.

Each of these proposed amendments has to pass the General Assembly again this legislative session before they are sent to the voters to decide whether to update our State Constitution. The amendments were reintroduced on January 6 as Senate Bills (“SBs”) 1 and 130 and started moving through the Pennsylvania Senate.

SB 1 would change the State Constitution to require a voter present government identification at every election before voting. SB 1 was amended in the Senate State Government Committee to include the proposed constitutional amendment that would allow the General Assembly to disapprove of a regulation without the input of the Governor.

After second consideration on the Senate floor, SB 1 was amended again in the Senate Rules Committee. There, the bill gained another unrelated amendment – a two-year statute of limitation allowing child sexual abuse survivors to bring claims against their abuser in Pennsylvania Courts, even though the original statute of limitations has already expired. The content of this amendment is what the Speaker of the House, Democrat Mark Rozzi, came to Congress to accomplish and would have already been decided by voters if it weren’t for a mistake by the Wolf Administration.

SB 130, which will receive a different vote, will require the Auditor General to audit elections and election results.

Elections and voting are the most critical parts of our democratic system. Our elected officials should make it easier for everyone to vote, not impose more barriers and gatekeep democracy. However, the most dangerous constitutional amendment introduced so far is also the most innocuous: the ability of the General Assembly to disapprove of regulations without the input of the Governor.

Everything from the fracking industry to children’s toys has to comply with some kind of regulation. Regulations are rules crafted by agencies, such as the Department of Environmental Protection or the Department of Health, by experts in their fields. Before a regulation is finalized, the General Assembly can bar it from being issued by passing a Concurrent Resolution that disapproves of the regulation. Currently, to comply with our constitution, the Concurrent Resolution is sent to the Governor to approve or veto. Thus, a regulation can’t be barred without the Governor’s approval or enough votes to overcome their veto, which is precisely what the General Assembly is trying to change with a constitutional amendment. They want to concentrate power in the General Assembly and remove the Governor from the process barring a regulation from going into effect.

Removing the Governor violates our system of checks and balances. It will allow the General Assembly to disregard expertise and facts to satisfy their political interests when a proposed regulation conflicts. If the General Assembly gets its wish, any future regulation could be at risk. Regulations that impose further limits on the fracking industry, help mitigate climate change, protect public health, raise the minimum wage, and more could be jeopardized. Our General Assembly should not have such a power, especially given their track record (see the potential loss of federal dollars because the legislature attempted to prevent the finalization of a regulation).

On Wednesday, January 11, the Pennsylvania Senate passed SB 1 and they are expected to pass SB 130 in the coming days. The House of Representatives must now pass the amendments before they are placed on the ballot for voter approval. Our Representatives can vote against these harmful and unnecessary amendments and stop them in their tracks, but they aren’t likely to do so without hearing your voice.

Click here to let your Representative know that their constituents do not want to see these constitutional amendments pass the House.