I-70 Accidents and “Construction” over Tunnel Ridge

This is the 21st installment in our What’s on your mind? blog series and was written by CCJ Community Organizer Tonya Yoders. 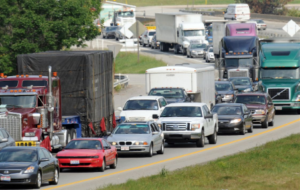 Almost every day, I have to drive the stretch of I-70 interstate between Washington, PA and Wheeling, WV. More often than not, there are significant delays just trying to get to my destination. The highway is currently reduced to one lane of traffic on both sides, backing traffic up for miles at times. This highway is an important route for truck drivers and many folks just trying to get to their jobs or homes.

When I first started regularly driving this road several months ago, I just thought, like most people I talk to, that it was because of regular, routine roadwork. That is actually not the case.

I began working for CCJ in March of this year and one of the first surprising things I learned was that a coal mine was in fact the reason for these “construction zones”. Tunnel Ridge Mine, owned by Alliance Coal Company, has an active panel beneath I-70. The company has said that between 2019 and 2038, longwall mining processes will be occurring at least nine times.

Since the start of the project, “ripples” have appeared on the interstate, caused by subsidence from the mining operations below. Subsidence is the movement of the ground that can happen after an area of land has been undermined. It can occur after coal is extracted from beneath and the land above sinks and moves to fill in the hollow parts left behind. The roadway has to be constantly monitored, 24/7, to watch for the dangerous after-effects of mining for coal beneath. Several large cracks and “compression bumps” have appeared since 2019 and have had to be repaired, halting traffic often.

Recently, I have personally noticed more traffic interruptions and backups. At the beginning of May, I did not make it home until well past 10:00pm because of an accident that occurred near the West Virginia state line and the Claysville exit, right near all of the “construction.” I later found out that two people from Pennsylvania had been killed. On May 17th, another accident occurred near the site, involving three vehicles. One person died as a result.

Those are not the only accidents that have happened there recently, either. They frequently happen around the “road work” zones, causing people to fear traveling on that road at all. The sheriff’s office has recently said they want to avoid more tragedy by asking people to slow down and look up while driving in the area. While that is always good advice, no matter how vigilant and careful one is through that area, it sometimes isn’t enough to stay safe. The construction there due to the longwall mining operations causes traffic to oftentimes be at a near or complete stop. That, combined with the rolling hills leading to the site, can make it difficult to see the traffic that is stopped until it is too late. On a road that is heavily traveled, especially by large semis, this is a very serious hazard.

Along with this, taxpayers are the ones left covering the bills to monitor and repair these roadways, again benefitting a multi-billion-dollar industry. All of the delays, all of the dangerous conditions on the roads, the three fatalities that have occurred just in the past two weeks…when will it end? When can I feel safe just trying to make it home at night again? When do we stop allowing these industries to cause us harm in so many different ways? Why must our community continue to pay with our well-being and tax money for one of the richest industries in the world?

Posted In: Coal, Environmental Justice, What's on your mind blog