To improve policy and regulations for the oversight of fossil fuel extraction and use; to educate, empower and organize coalfield residents; and to protect public and environmental health.

Our approach for working with area residents values their knowledge about the land, waterways, and communities. Our recognition of local expertise is grounded in the belief that people who live with the daily impacts of fossil fuel extraction should be treated with the utmost respect. Our work is informed and directed by how local people think these industries should be held accountable for impacts.

We provide community members with detailed information about proposed projects and potential impacts so they can make informed decisions about individual or collective actions. We connect people in similar struggles together to build power and to invest in the leadership of people living in Washington and Greene Counties.

By blending organizing and legal work, we seek to create an expanded set of options for achieving justice than might be produced by following solely a legal or organizing approach. Through this approach, and by investing in people’s skills and leadership, our communities will be able to advocate effectively for a healthy environment and thriving economy.

"I’m proud to work for an organization that is genuinely mission-driven and being surrounded by people who care deeply about making their community a better place. CCJ provides a platform where my coworkers and I can work with our community members to help find pathways where so many have built hurdles. Be it economic justice to environmental justice, I know this team will give everything they have to do what's right for all people in Southwest Pennsylvania." ~ Ethan Story, Community Advocate 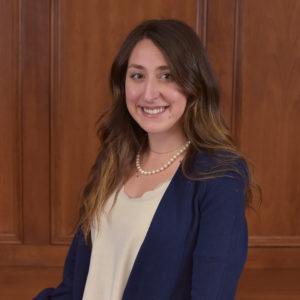 The Center for Coalfield Justice was formed as the “Tri-State Citizens Mining Network” in 1994 by a coalition of grassroots groups and individuals concerned about the effects coal mining had on communities and the environment. This was shortly after Congress had passed the Surface Mining and Reclamation Act (SMCRA), which created federal regulations on surface coal mining operations.  To read a few words by one of our founders and an activist involved in passing SMCRA, Wyona Coleman, click here.

The people involved recognized the need to work together to build a strong voice in the coalfield community. As Tri-State Citizens Mining Network, the organization advocated for better protections from longwall coal mining, an extreme form of underground mining, at the state level in Ohio, West Virginia, and Pennsylvania. In 2007 we reorganized into the Center for Coalfield Justice (CCJ) and expanded to work on fossil fuel extraction and use, recognizing that our communities were not just impacted by coal mining but also oil and gas. Around this time, the organization brought on their first paid staff to focus on implementing the mission. During the next few years, the core focus of CCJ’s work was centered around accountability for the destruction of the dam at Ryerson Station State Park because of longwall mining impacts.

CCJ responded to the boom in fracking the Marcellus Shale in the late 2000s by providing educational resources about people’s rights around leasing. In 2013, we expanded our focus on environmental justice to include economic justice, recognizing the deep connections of energy extraction and our economy in southwestern Pennsylvania. In 2017, after fully recognizing how environmental issues are tied into economic and social ones, we became more people-focused. We recognize that our members don’t live single-issue lives. In 2019, we started a campaign around civic engagement and voter education, as the only way to protect our health and economy is to ensure that those in power are accountable to the people and not CEOs and shareholders.

Over the past 5 years, we have focused on investing in the people who live in Washington and Greene counties. Our staff has grown from 2 employees to 10 employees, most of whom live in the communities in which we organize. Our membership has increased by 200% and we have tripled our number of active volunteers. We also moved to a larger office space and added a community meeting space for social justice events in the area.

The Center for Coalfield Justice is a non-profit, 501(c)(3) organization governed by a volunteer Board of Directors. Most of our staff are from or at least live in Washington or Greene Counties, the two counties we serve in southwestern Pennsylvania. We believe that if we all work together, we can have thriving rural communities. To read more about the principles that form the basis of our organizing, check out this blog.

Hosted a meeting with over 50 people to learn about what their rights are when being undermined and how to file a complaint. The PA DEP mining chief attended the meeting and fielded community questions. 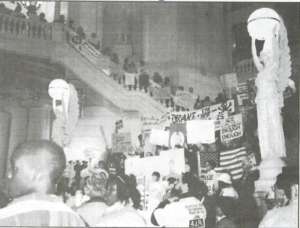 Filed a lawsuit with partner organizations for more bonding to cover water pollution from coal mining.

Residents organized a protest outside of state offices with gravestones of the homes lost to longwall coal mining and raised awareness of threats to two historic properties, the Kent Farm and Thralls House, which the coal company was trying to have removed from the National Historic Registry.

Over 50 community members gathered along I-70 in Washington, PA to raise awareness of the damage to our roads from coal mining and the state’s absence in forcing operators to pay for the repairs. 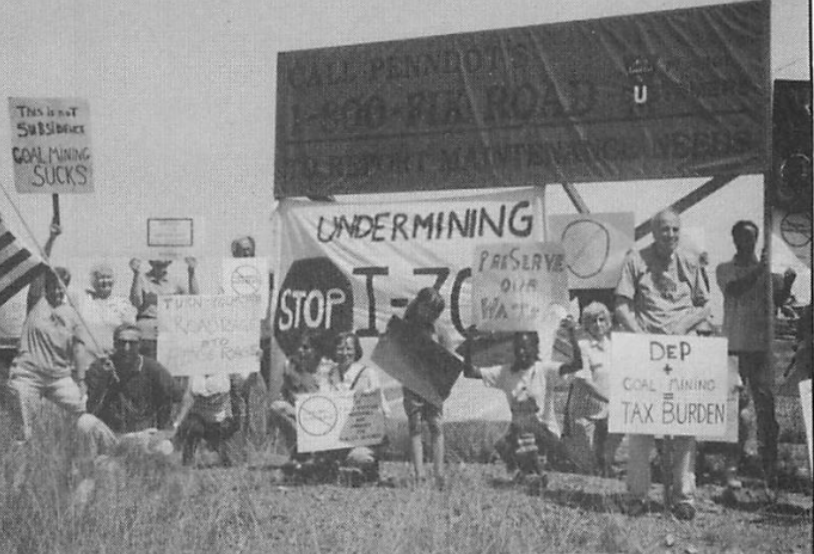 Launched a campaign to make coal companies pay for longwall mining damage by improving the current mining laws. We held rallies, engaged in letter writing campaigns, and gave legislators a tour of the damage done by longwall coal mining.

At Ryerson Station State Park, Duke Lake, the jewel of the park, was drained after longwall coal mining happened nearby. 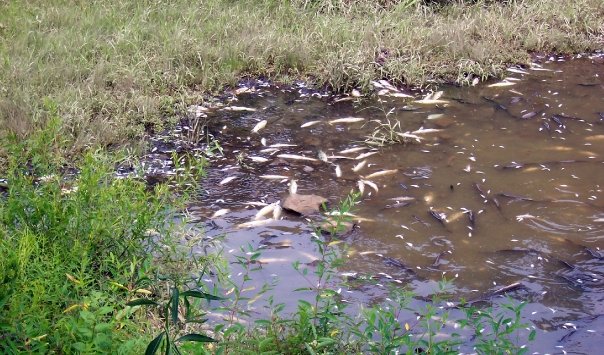 Organized and held our first-ever DRYerson Festival to advocate for Ryerson Station State park. This event has been held annually ever since.

Reincorporated into the Center for Coalfield Justice.

Joined with Mountain Watershed Association and other environmental partners to bring about the Marcellus Citizen Stewardship Project to provide a watchdog and organizing support to people across southwestern PA who wanted to resist fracking.

CCJ joined the legal case between Consol, DEP, and DCNR to ensure community interest was represented in the legal fight to restore Duke Lake.

Launched our Landscape Today reports to map and track the increase in fracking and longwall coal mining in Greene and Washington Counties, and produced these maps to show the cumulative impacts on our communities. We partnered with the local newspaper to publish these in the paper.

Began to offer Fracking in the Coalfields Tours. 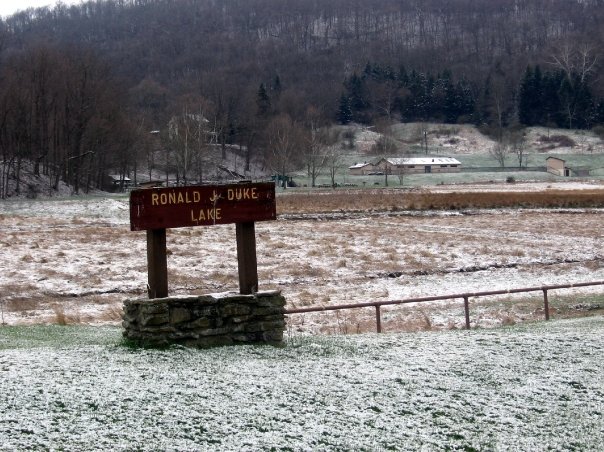 Researched and published a report, Community Indicators of Environmental Justice, to highlight all the factors beyond just race and income that put communities at risk of increased environmental harm.

Started working with community members in Nottingham Township to prevent a new coal mine from opening near Mingo Creek Park. CCJ and the residents got the township to adopt over a dozen special conditions to mitigate harm from a potential new mining operation.

CCJ helped to organize and form the Protectors of Mingo, a group that we still work closely with today, to prevent a new coal mine from opening near Mingo Creek Park.

CCJ filed the first permit appeal for the Bailey Mine East Expansion which authorized mining under Ryerson Station State Park.

Worked with retired mine managers from Consol Energy to fight to get their healthcare reinstated after the conditions of a sale to Murray Energy broke a promise made to them by Consol. Organized many actions outside the company’s headquarters, and at the hockey arena in downtown Pittsburgh, and spoke at their shareholder meeting. This was our first active work to build relationships with workers and bring more economic justice to our advocacy. 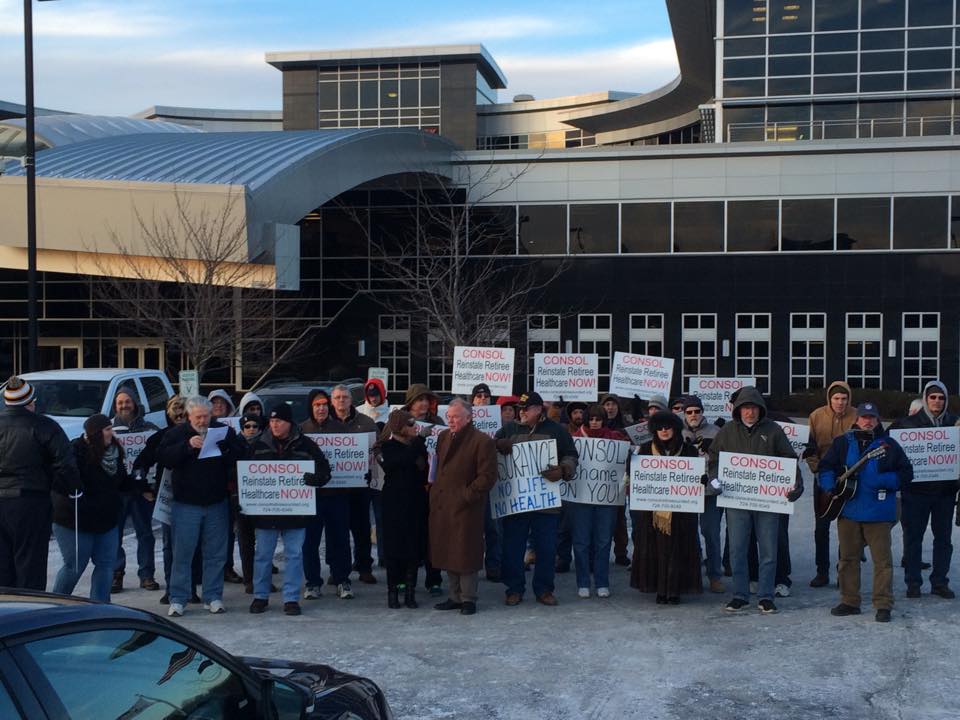 Completed a Coalfield Listening Project in Greene County to hear the concerns and hopes from residents on the economic future of the community.

Worked with residents, prison guards, and loved ones of incarcerated people to raise awareness of the impacts from a coal ash dump between LaBelle, PA and SCI Fayette. This work was heavily highlighted by the media, which contributed to the connections among impacted communities. Ultimately the power plants decided to no longer take coal ash to the dump in LaBelle, PA 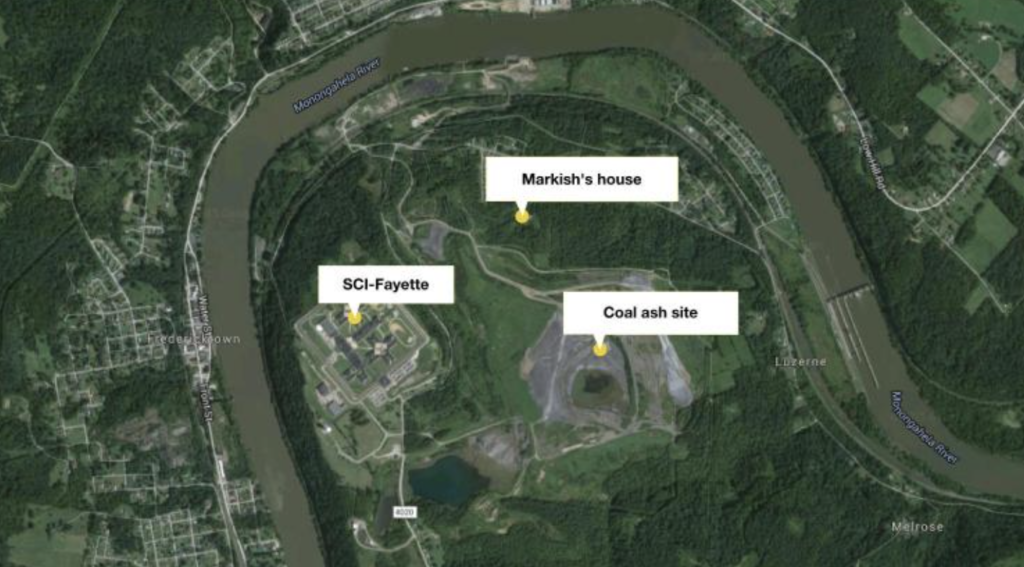 CCJ filed a second appeal to a permit that authorized mining under two sections of Polen Run outside Ryerson Station State Park boundaries. This permit appeal was consolidated together with the permit appeal filed in 2014.

The Department of Conservation and Natural Resources (DCNR) informed the community that the dam for Duke Lake at Ryerson Station State Park cannot be rebuilt because of ongoing ground movement. CCJ demanded a community-driven process to decide how to invest resources into the park and was invited to join the government-community task force.

CCJ filed their third permit appeal to the Bailey Mine East Expansion that authorized longwall coal mining under sections of Polen Run (outside the park) and Kent Run (inside the park). In addition, we filed a supersedeas to get an emergency stop to the advancement of mining after there was damage to Polen Run from this permit approval. After a 3-day-long hearing, the Environmental Hearing Board granted CCJ the supersedeas, and we protected two sections of Kent Run within the park from being undermined.

Worked with community members to stop an oil and gas water filling station near the Jefferson-Morgan Schools. The local zoning board denied the application and the local courts upheld that decision through appeals.

After hearing a three-week trial in 2016 and additional briefing over the next year, the Environmental Hearing Board agreed with CCJ and ruled that if a permit predicts damage to a stream that requires the reconstruction of the stream, it should not be allowed in the first place. 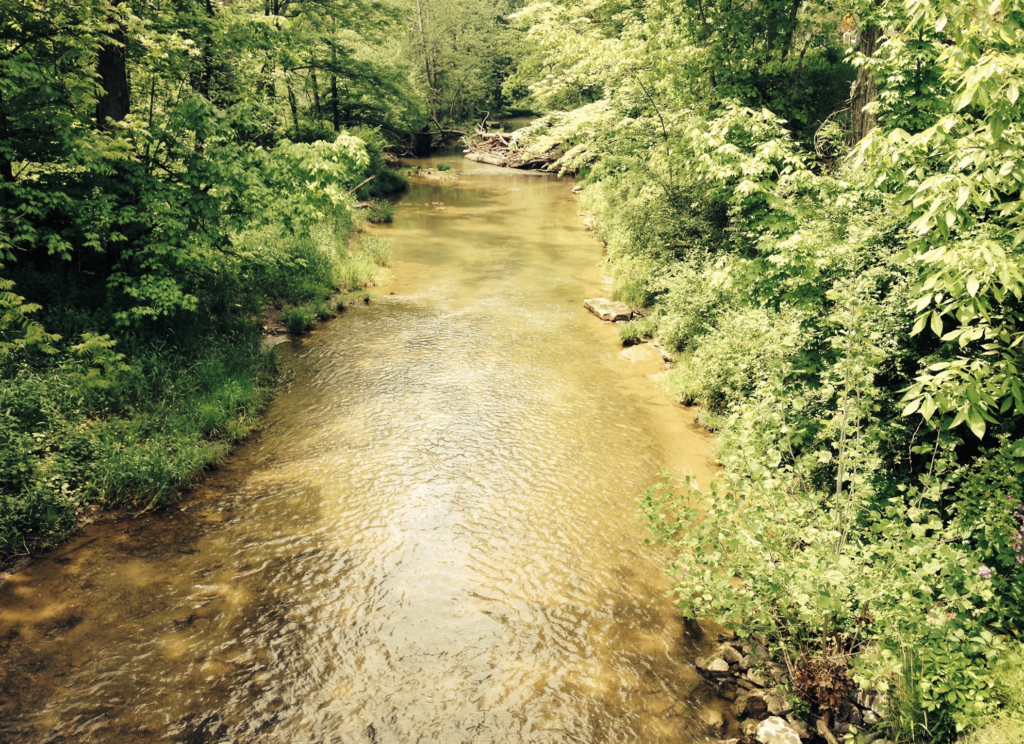 Held the People, Jobs, and Climate March in Washington, PA, one of the first actions in a long time in the streets of Washington. We brought together over 70 people fighting for environmental, economic, and social justice to show that our small town has a critical stake in the fight for our futures. 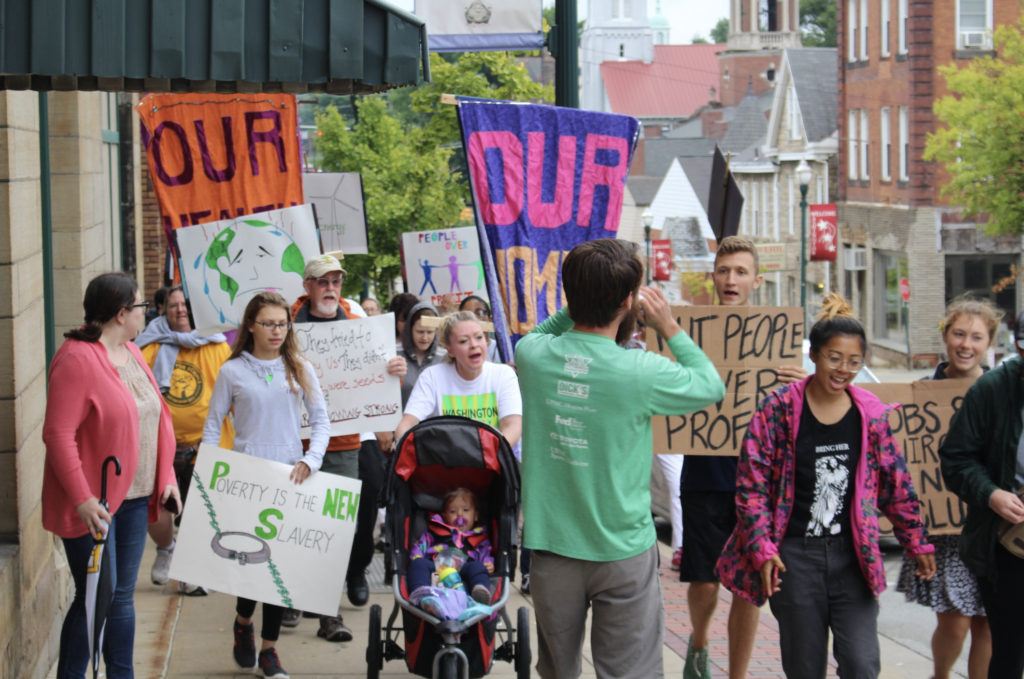 Advocated to renew the black lung fund and pass the RECLAIM act in Washington, DC. 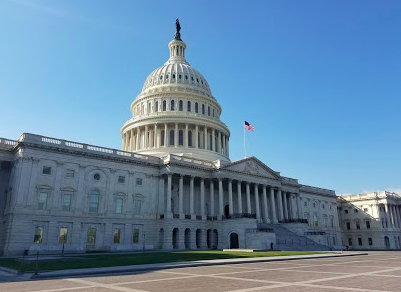 Co-Hosted a Grassroots Organizing Summit with over 60 people from across the tri-state area in order to strengthen relationships, learn from each other, and root our movement in trust to stop petrochemical development. 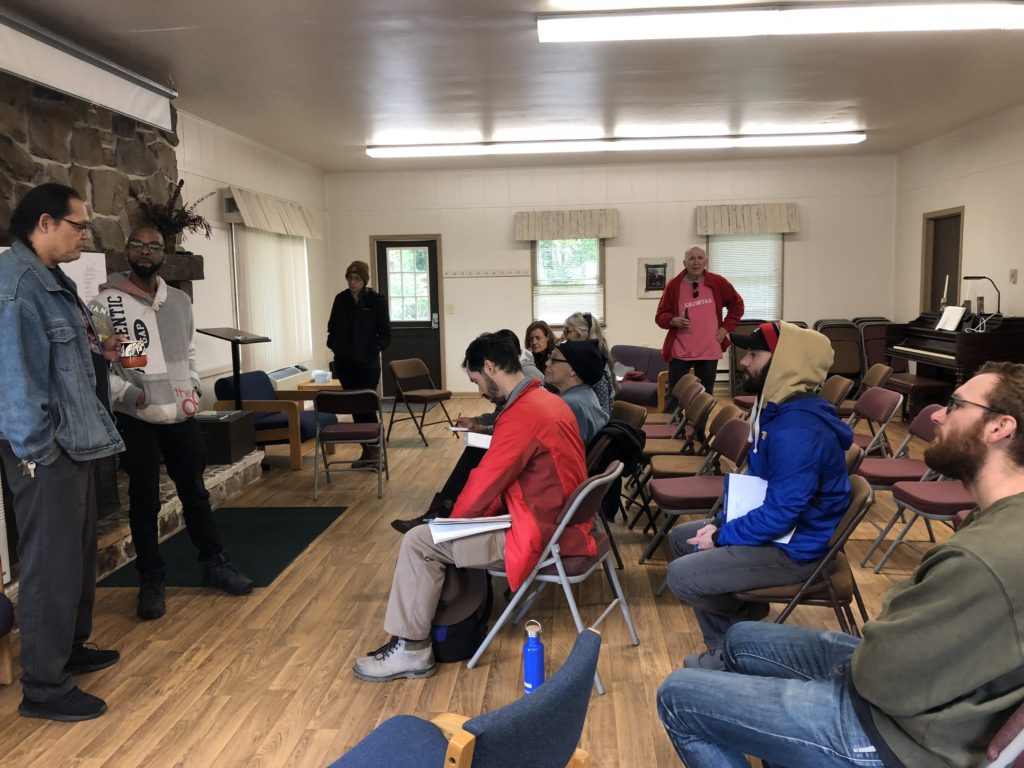 Raised awareness of the increase in childhood cancers in our region, bringing impacted parents to Harrisburg, demanding that the PA Governor take action to ensure that oil and gas operations are not putting our families at risk. The Governor committed to allocating resources to the Department of Health to research the public health impacts from oil and gas operations. 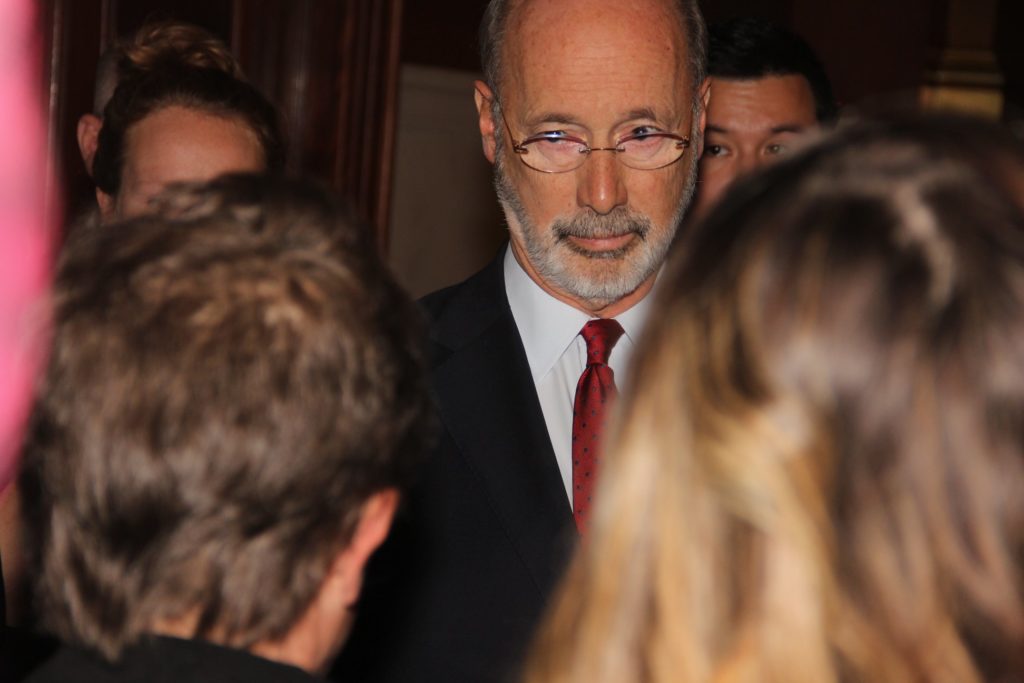 Launched our first-ever deep canvass. We focused on communities in Greene County to hear from people directly about what they want for the future of the economy, and built an economic justice team. 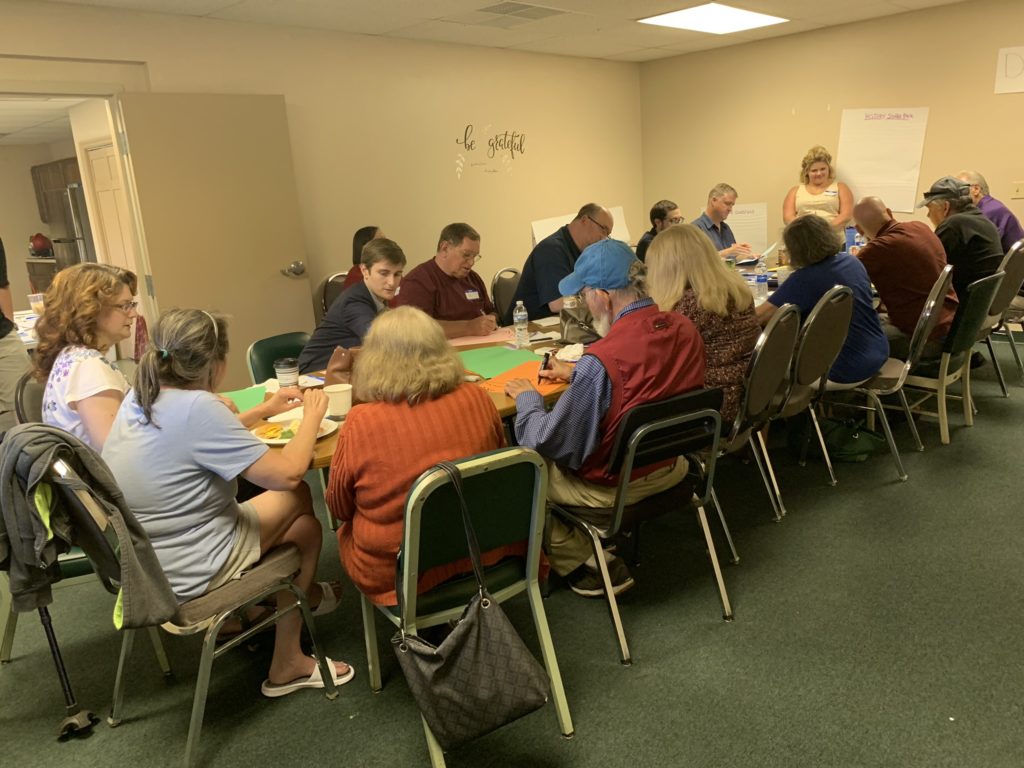 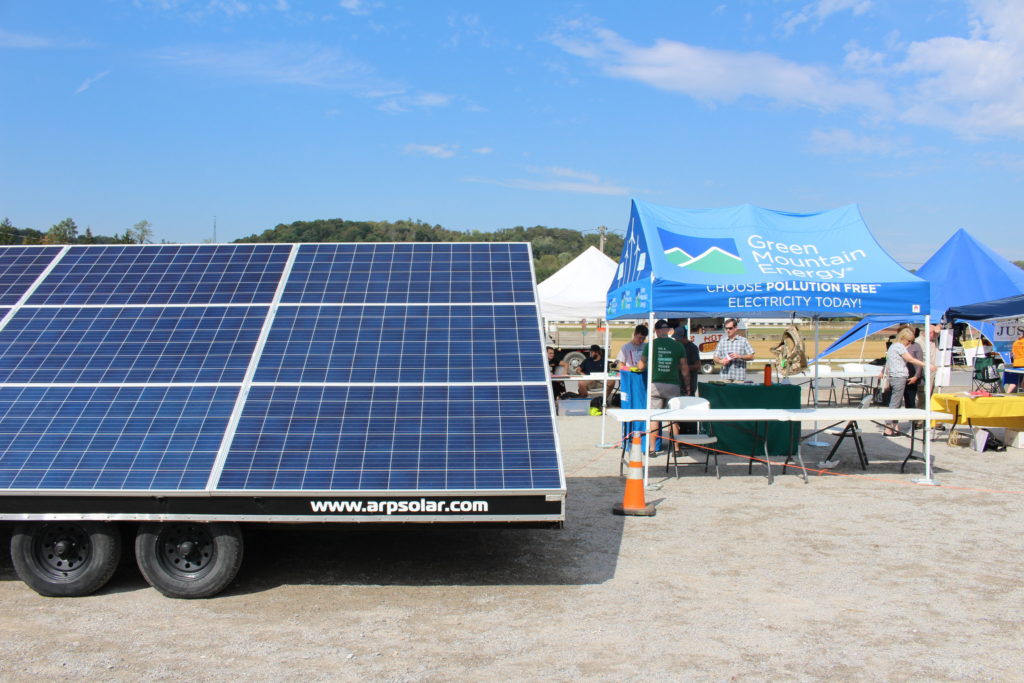 Delivered our first voter education mailer to residents of Greene County so that they would know where the candidates for Greene County Commissioner stood on economic justice.

We quickly adapted to the impacts of the pandemic to move our work remotely. We raised over $12,000 to direct service organizations, like food banks, to support the growing needs in our communities. We hosted dozens of virtual gatherings to stay connected. 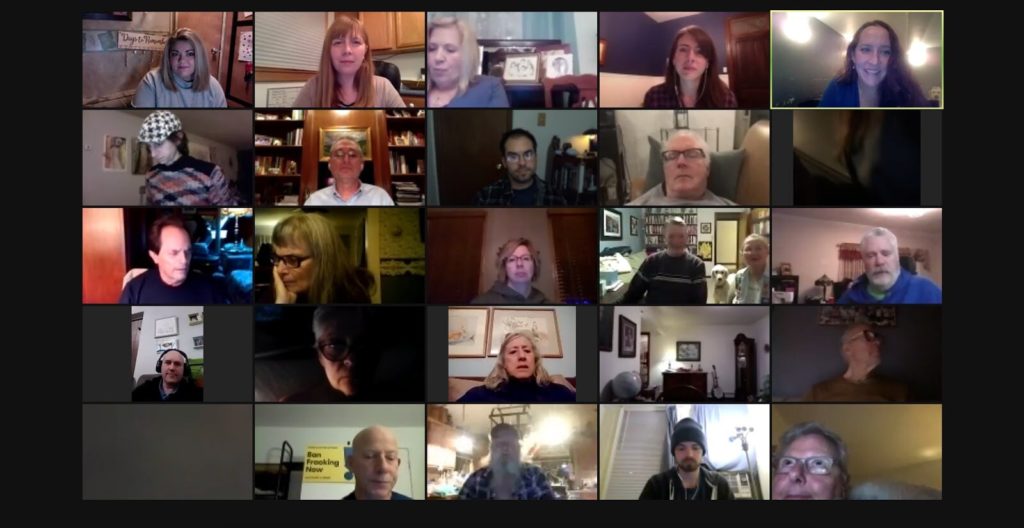 Joined in the launch of the National Economic Transition (NET) Platform for coalfield communities in order to bring to light the best ways to support our local economies.

Helped organize 3 actions to demand that Black Lives Matter and fight for racial justice in our communities. 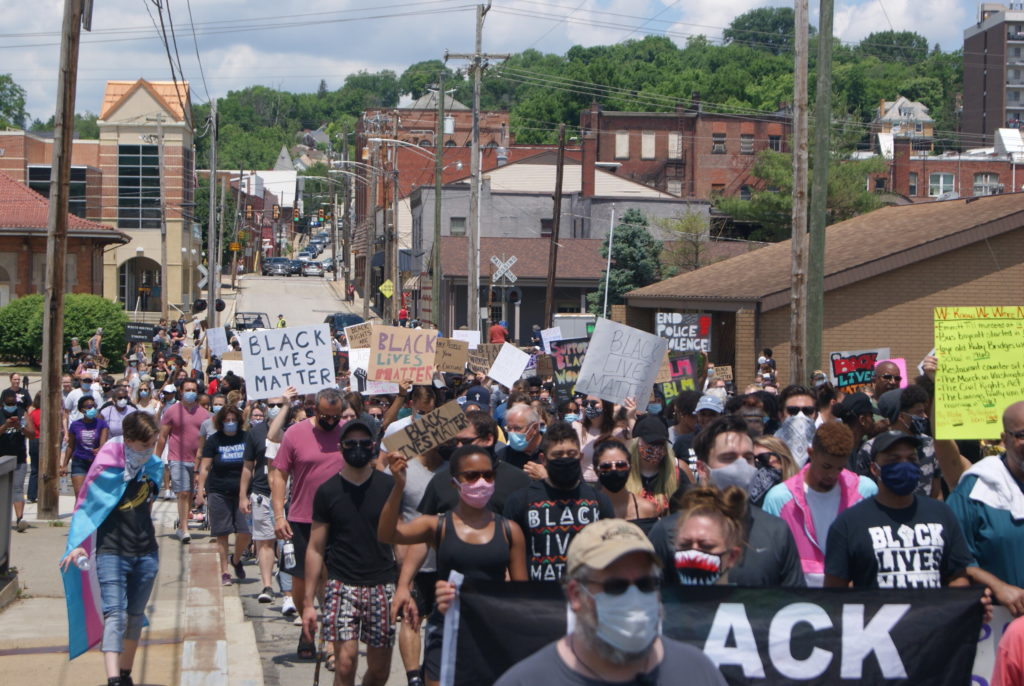 Launched our Defending Our Democracy Program to increase civic engagement and ensure residents know what all candidates’ positions are on the issues that matter to our communities. We had over 300 conversations with people throughout the year and hosted a car rally to ensure every vote was counted in the November election. 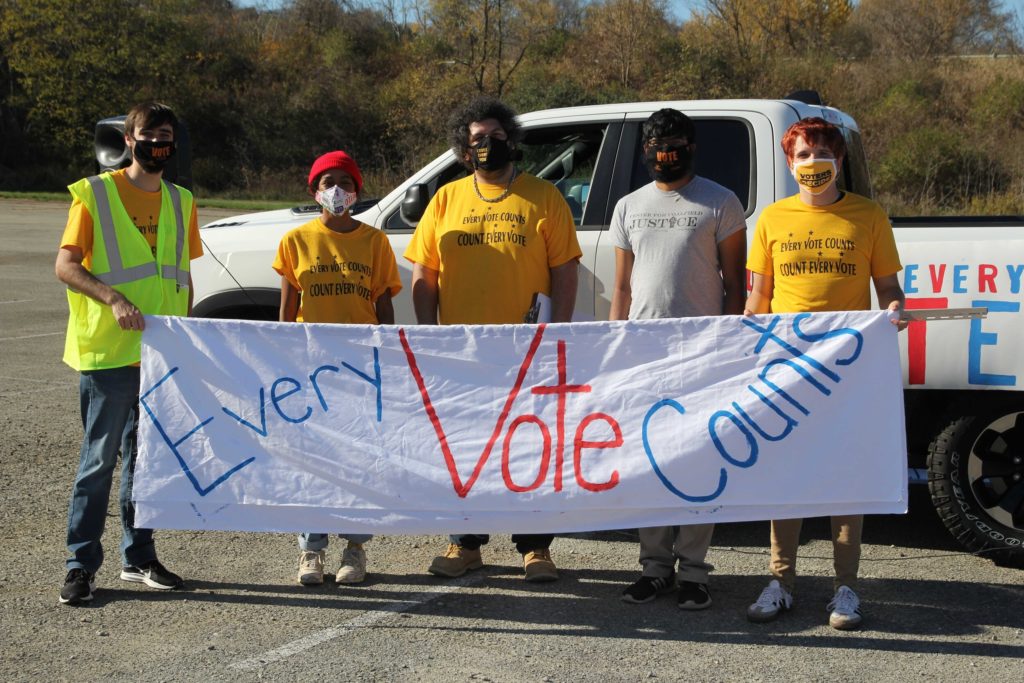