The Reality of Harm Reduction 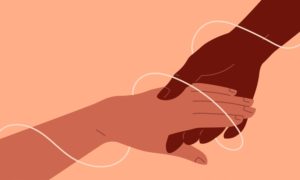 This is the 23rd installment in our What’s on your mind? blog series and was written by CCJ Organizing Fellow Saint McClendon. Have something on your mind? Write about it! Please read this blog for more information.

Humans have ingested substances since the beginning of time, but currently we can observe from our backyards the traumatic effects caused by the abuse of opioids and other substances. Unfortunately, people that we have put in power are not putting in the work to protect families, neighbors, and loved ones–if anything, they are causing more harm. The ongoing neglect of those suffering from substance use disorders and using substances to self-medicate not only affects the person who uses, but those around them as well. As a person who has been involved with harm reduction for a few years, I interviewed someone I met through harm reduction work about putting the theory into practice. Before getting into that, we need to discuss what harm reduction is.

People tend to believe that harm reduction is radical, but in truth it is a realistic approach. The history of harm reduction in the US goes back to the 60s. Many movements in this country have engaged in harm reduction, such as the women’s health movement, grassroots collectives during the AIDs crisis, and the Black Panther party’s work to address hunger and lack of resources in their communities. Harm reduction can come in many forms, and the harm reduction model has been and continues to be used to deter the spread of diseases and viruses, fight hunger, and curb substance use, among other things.

I conducted an interview with Al (he/him), who has been with Prevention Point for the past two years and has worked in the clinical field of harm reduction and community organizing around substance abuse since 2011.  He also has a Master’s degree in social work. During this discussion, I really just wanted to give Al the floor. I had a few questions planned ahead, but much of the conversation continued to roll as we conversed. One thing that I asked was why he thought harm reduction was important. Al explained that even though harm reduction is just now becoming mainstream, it has been around longer than the opioid crisis. Harm reduction is recommended by the World Health Organization (WHO) and the US Food and Drug Administration (FDA), and some federal money is put towards it. Not everyone is trying to or wants to get into recovery, but when options are available to them through collectives doing harm reduction work, those individuals are five times more likely to get help. Al pointed out that if we do not meet people where they are at, nothing is going to change.

Most places that offer treatment for people with a substance use disorder are faith-based, cost money, and/or require abstinence, meaning those engaging in substance use have to quit cold turkey. This can cause painful withdrawal symptoms that can seriously impact one’s emotional and physical wellbeing during their recovery. Prevention Point is free, both when it comes to accessing resources and being a space without judgment. Al talked about how Prevention Point has doctors and nurses that travel to neighborhoods to provide care, and not just care in regard to substance use, but also maternal care, wound care, and the collection of used needles to keep the streets a little bit safer. Prevention Point does not have any expectations or strings attached, yet has seen progress when it comes to those suffering with a substance use disorder.

Al pointed out that one of the biggest obstacles that those participating in harm reduction face are the stigmas surrounding drug use. It is very common for users to be shamed rather than helped in our society. Folks that have had a negative experience with someone suffering from addiction tend to project their resulting negative attitude to other users, but that is unfortunate, as not every user is the same. Some pharmacies still do not carry naloxone because of the belief that narcan increases drug use, even though studies show that it does not increase drug use or crime.

The process of those conducting harm reduction, including the team at Prevention Point, is not like a pop-up shop. PP has made a connection with each neighborhood by talking to community members and leaders to get their approval. There is a CAB, a community advisory board, that folks in harm reduction stay in contact with. Prevention Point specifically keeps track of what substances are on the street by name, color, and other attributes, and keeps baggies on-hand for drugs that participants are willing to give up.

I asked Al what he would say to someone who is on the border as to how they feel about harm reduction. His response was that humans are going to engage in certain behaviors and therefore, society should do what is possible to keep them safe. Al added that harm reduction is used on a daily basis, but most people do not even realize it. Fire extinguishers, for example, do not prevent a fire but prevent it from becoming something worse. This is similar to how Prevention Point and other harm reduction collectives put in the work when it comes to the ongoing opioid and drug crisis.

The United States leads the world in substance use; you would think more effort would be put into reducing the number of people we lose to overdose. The war on drugs goes on in this country, and the incarceration of people who use drugs does not help, as there is a 60% recidivism rate. Jailing people does not help and has negative impacts on families and relationships. Instead, there are many ways that we as a community can help keep each other safe. We can carry narcan, know the signs of an overdose, and stay informed of what’s going on outside of our own little bubble. People cannot go to recovery when they are dead. If no one else is going to help our neighbors, we need to do it ourselves. As the late congresswoman Shirley Chisholm said, “Service is the rent you pay for room on this earth.”

Have something on your mind? Write about it! Please read this blog for more information.