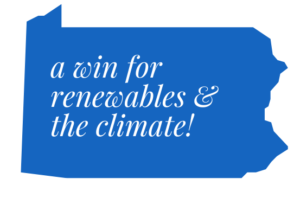 On July 7, 2022, the Pennsylvania General Assembly passed a bill that has been touted as a way to give consumers more access to affordable electricity, but in reality represented an effort to restrict local governments’ ability to set policies that address the climate crisis.1Senator Gene Yaw, Energy Choice Legislation Memorandum on Senate Bill 275, January 22, 2022,https://www.legis.state.pa.us//cfdocs/Legis/CSM/showMemoPublic.cfm?chamber=S&SPick=20210&cosponId=34333. Senate Bill (“SB”) 275, introduced by Gene Yaw, would make it so local communities cannot restrict or prohibit gas utilities in new homes and buildings – this includes encouraging the use of electricity generated by renewable sources instead of gas for heating and clothes drying in homes and buildings.

Governor Wolf vetoed the bill on July 11, 2022, citing three important conclusions. First, municipalities must have all the tools available to them “to address the global threat of climate change in future years.” This allows our local governments to fulfill their essential role in protecting their constituents’ health, safety, and well-being by encouraging the use of clean energy. Additionally, the bill would have stood “in the way of clean energy incentives and initiatives.” And finally, the measures within the bill were deemed “unnecessary” because “the Public Utility Commission currently regulates the provision of utility services in the Commonwealth.”2Governor Tom Wolf, Veto Message for SB 275, July 11, 2022, https://www.governor.pa.gov/wp-content/uploads/2022/07/20220711-Veto-Message-SB275.pdf.

SB 275 looks to be the result of a national effort by the gas utility industry which prevents local governments from placing regulations on their business. The bill prevents Pennsylvania municipalities from adopting any policy that restricts or prohibits or has the effect of limiting or prohibiting gas in new homes and buildings, including encouraging electricity generated by renewables instead of gas hookups in homes and buildings. The bill is written so broadly that it could have blocked the adoption of energy efficiency programs and prevented cities from offering financial incentives to encourage developers to go all-electric.

This is a response to several communities, such as Berkeley and San Francisco, California, that have banned natural gas hookups in all new building construction to reduce greenhouse gas emissions and slow the impact of the climate crisis. Pennsylvania legislators are looking to join 21 states that have already passed these so-called “preemption laws” prohibiting cities from banning natural gas.

These legislators ignore that technology has provided consumers with clean, sustainable alternatives. For example, electric heat pumps heat homes more sustainably than gas furnaces, and consumers can elect for an induction range instead of a gas stove. Additionally, the cost of oil and gas fluctuates, whereas the price of energy generated by renewable sources tends to be more consistent. In short, SB 275 limits the ability of local officials to shape permitting rules which would result in less air pollution.

However, legislators are not ignoring the call from the gas industry to drill more in the state. This legislation does not provide a “freedom of choice.” Instead, it disregards the concerns of most Pennsylvanians that climate change is causing problems now, and that our elected officials must act to protect our health and environment. This legislation would allow the gas industry to continue to grow its consumer base without considering the environmental effects it may cause.

In conclusion, SB 275 was another example of Pennsylvania legislators making a law to benefit the oil and gas industry. Luckily, Governor Wolf stood with Pennsylvanians and vetoed the bill. With his veto, he protected local government’s freedom of choice in creating policy that protects the health and safety of their community.

Nina Victoria is co-author of this piece. You can read more about Nina and see her other blogs here.