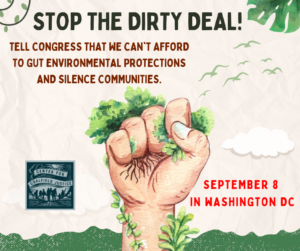 To get Senator Manchin’s vote on the Inflation Reduction Act (IRA), Democratic leadership had to make a deal. There is an alleged agreement that for Manchin’s vote on the IRA, Senate Majority Leader Chuck Schumer would attach a bill that would amend the current laws and regulations on environmental permitting requirements by the end of the fiscal year – which is September 30, 2022. With such a tight deadline, the changes will likely be attached to a budget bill called a Continuing Resolution, which funds the government at the current level for a set period of time. A Continuing Resolution will fund the government until Congress can pass a budget for the 2022-2023 fiscal year. In other words, changing environmental protections, likely to favor fossil fuels, is to be attached to a bill that will keep the government open. This scenario makes it challenging for environmental justice champions to vote against weakening environmental protections because it could result in a government shutdown. Pitting the option of keeping the government open against protecting our water and air is just bad policy-making. The Center for Coalfield Justice will be at the United States Capitol with our Appalachian allies on September 8th to convince Schumer to leave changes to permitting out of the must-pass budget bill, and we want you to be there with us.

The proposed “reform” will gut bedrock environmental regulations that protect our health and the environment. It will lower the federal floor, so that permits can be approved with less scrutiny. This would harm our region if used to expedite fossil fuel infrastructure. We know that some fossil fuel projects will be affected, as they will be prioritized as projects of “strategic national importance.” Strategic national importance projects are designated by the President and must be balanced between fossil fuel projects, renewable energy projects, and other projects that will help the clean energy transition and decarbonization. These projects would be subject to the lowest federal floor as their permit approval is prioritized. Suppose the changes to permitting were to occur: In that case, communities in Southwest Pennsylvania and Appalachia may see a rapid expansion of fossil fuel infrastructure as the time frame for permit approval would be much shorter.

Dramatic changes to necessary environmental protections do not belong in a budget bill, it’s not the democratic process. Legislators need the opportunity to consider the merits of the proposal without feeling obligated to vote in favor just to keep the government running. When there is an opportunity for legislators to vote on the merits, it is much easier for them to vote no. The dirty deal needs to die, so we must convince Senator Schumer to keep permitting “reform” out of the Continuing Resolution that ensures the government remains open.

The Center for Coalfield Justice and our allies in Appalachia will be rallying at the United States Capital on September 8th to stop the dirty deal, and we need your help. Come to Washington D.C. with us and use your voice so Senator Schumer will see that Appalachia won’t stand for closed-door deals that will harm our health and the environment.

CCJ is providing transportation to and from the event and meals during the day. Please register here to get on the bus to join our partners across Appalachia in DC to ensure that members of Congress pledge to block any efforts to weaken environmental protections.