CCJ Rallied with Hundreds of Activists Against the Backroom Permitting Reform Deal. Add your Voice to the Opposition! 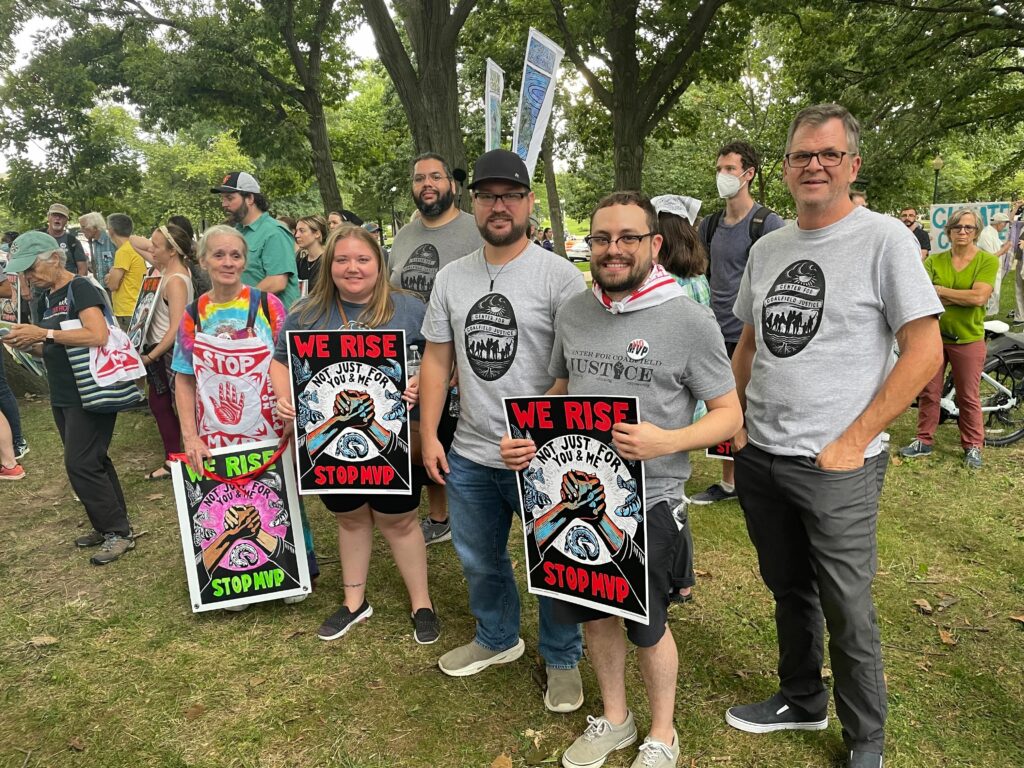 Click Here to Tell Congress “NO” to the Dirty Deal

(this action has passed)

On Thursday, September 8th, the Center for Coalfield Justice (“CCJ”) joined over 600 environmental and climate activists from across the nation in Washington, D.C. to protest what has become known as the “Dirty Deal” between Senator Joe Manchin and Democratic Leadership. While the exact details of the deal are not yet public, a draft memo reveals that it would weaken environmental permitting requirements for energy projects, limit public participation during the review process, and fast-track fossil fuel and mining projects – including Senator Manchin’s pet project, the Mountain Valley Pipeline. For more information about the deal and why it shouldn’t be attached to a Continuing Resolution that needs to pass by the end of the month, see our previous blog by Nina Victoria here.

The potential impact of this resolution on our region and communities nationwide that face fossil fuel extraction is what drew 14 CCJ members and staff to the rally outside the Capitol Building.

Keith Fullerton, Vice Chair of CCJ’s Board and a Waynesburg resident, expressed why he attended, saying “it was important for me to be there to support other impacted communities. We should always show solidarity with one another in this fight.”

Maddie Hinkle, a Community Advocate with the Mountain Watershed Association and a Mount Pleasant resident said,“I wanted to participate today because Appalachian communities have been burdened with the negative implications of resource extraction since the 1800s.” Hinkle continued, “But our water, our land, and our health is worth more than lining the pockets of dirty politicians. We deserve better. And our elected officials need to be better.”

Greg Swiderski is a CCJ member from Pittsburgh who has been attending rallies in D.C. since the peace marches of the Vietnam War. “Like with those [peace marches], this one was about bringing awareness to a broader number of people and trying to raise concern about these issues that people don’t know about. An event like this can give a voice to the people and show others what’s going on with the people that are elected,” said Greg.

Speakers from Appalachia, the Gulf Coast, the Great Plains, and even Alaska shared the harm that has been done by existing fossil fuel projects in their regions and the ongoing efforts to resist new ones.

Gina Peltier, a Water Protector and citizen of the Turtle Mountain Band of Chippewa Indians, described the toll of resisting the Line 3 pipeline in Minnesota. “I have been run over by police, tased, had my finger broken. I was arrested while praying to the Creator to protect our land,” said Peltier, surrounded by fellow pipeline resistance advocates on stage with her. “We cannot be intimidated, and I will continue to show up.”

The rally included more than a dozen speeches from community and indigenous leaders from frontlines all around the country. It featured performances by Appalachian folk musicians, a southern gospel quartet, and Native drummers and singers playing traditional songs. A highlight was 7-year-old Danger Winslow, held up to the microphone by his mother, decrying the use of his Asheville, NC community as a sacrifice zone by natural gas companies. “My life means more than your money,” Winslow exclaimed. “Water is sacred, water is life! Without water, we have no future.”

The diversity of speakers and attendees in age, race, and geography was a highlight for some. “One of the coolest things was definitely seeing the generations of people in the community come together. How the older generation interacted with younger activists and were able to all join over this issue was super encouraging,” said Hinkle.

Greg Swiderski agreed, saying while a lot of speakers may have been repeating the same general message, he learned about new issues thanks to “a young, integrated crowd including people of color and especially Native perspectives that aren’t always present at these kinds of events.”

George Sligar, a Waynesburg resident, doesn’t normally engage with politics outside of “sporadic voting.” Yet he came away from the event impressed by the focus on Mother Earth and the balance of masculine and feminine energy expressed by speakers. “[It’s] a reminder that our masculine-fueled [ideas of] progress cannot disrespect the feminine life-giving qualities of the biosphere. There has to be a balance.”

The rally followed a day of intense lobbying inside the Capitol and phone calls and emails from constituents back home to persuade members of Congress to oppose the deal. Now, one week later and with a vote on the horizon, it’s important that we continue the momentum of this amazing event by reaching out to our own elected officials. By filling out the form linked below, you can send a letter directly to Senator Bob Casey and Senate Majority Leader Chuck Schumer emphasizing the need to strip permitting “reform” from the Continuing Resolution.

See a more recent blog on this issue here.

(this action has passed)