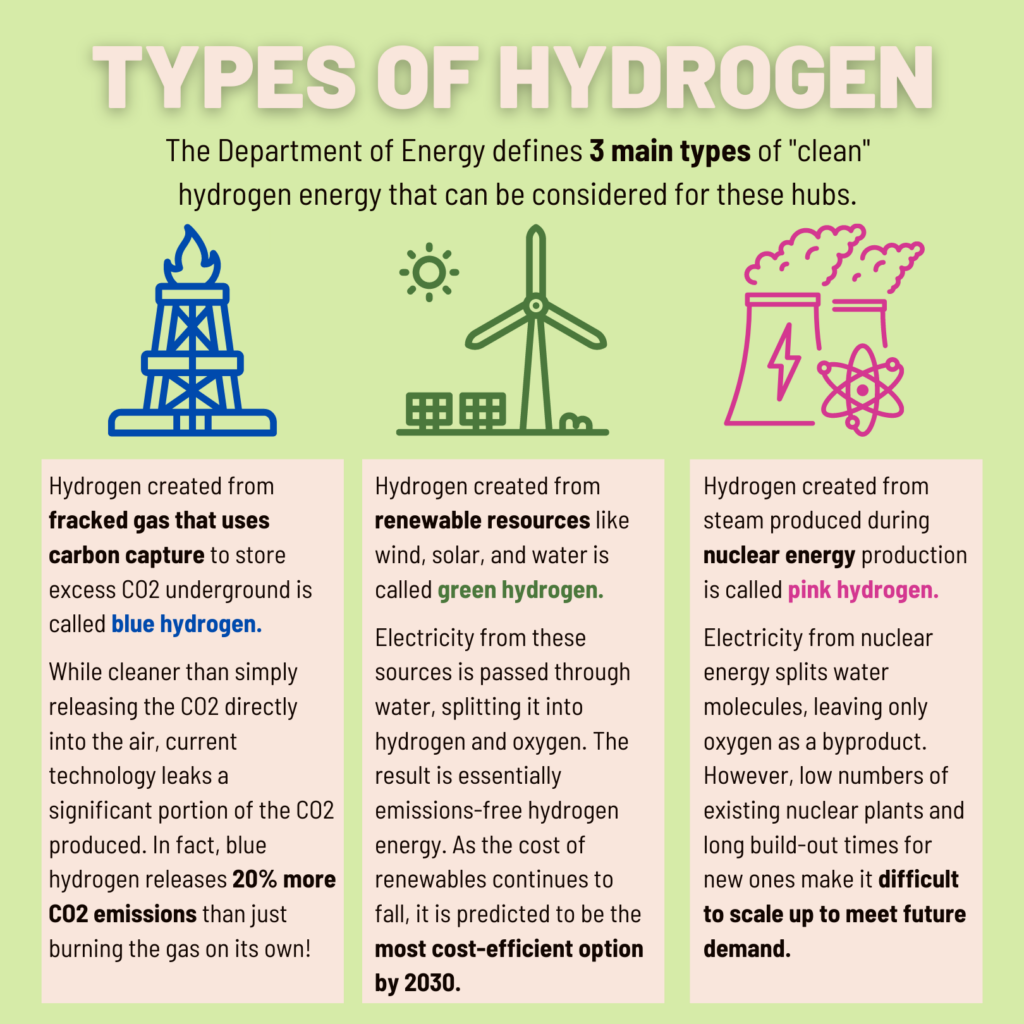 Pennsylvania state legislators, Governor Wolf, and the fossil fuel industry and their allies worked behind the scenes for months on two pieces of legislation to ensure Pennsylvania will be home to a Regional “Clean” Hydrogen Hub. One bill gives billions of dollars to the fossil fuel industry through the middle of the century, while the other incentivizes costly, unproven technologies to decarbonize. Combined, these bills will keep us entrenched in fossil fuel reliance for the foreseeable future, instead of accelerating our transition to a clean energy future.

Hydrogen has been touted as the clean energy source of the future because it is supposed to be a zero-emissions alternative. The federal Infrastructure Investment and Jobs Act and the Inflation Reduction Act both contained significant investments in hydrogen as a clean energy source and carbon capture, utilization, and storage technologies (CCUS). From this investment came the Regional Clean Hydrogen Hubs (“H2Hubs”) program run by the United States Department of Energy (“DOE”). The DOE will provide up to $7 billion to establish between six and ten H2Hubs in the United States, and Governor Wolf wants to ensure that one of them is in our backyard.

However, the cleanliness of hydrogen depends on how the element is isolated from the compounds in which it naturally exists, or how it is produced. Almost all of the hydrogen commercially produced in the United States is “gray” hydrogen isolated through steam-methane reforming – a process by which hydrogen is separated from the carbon atoms in methane. The main source of the methane necessary for this process is natural gas, and, as those of us in Southwestern Pennsylvania know, natural gas is gathered through fracking. This type of hydrogen is not clean.

Grey hydrogen transforms into what is known as “blue” hydrogen when CCUS technologies are employed. CCUS is used in the hydrogen process to capture carbon dioxide, a byproduct of production. There is no other difference between gray and blue hydrogen. While blue hydrogen is touted as clean, the carbon footprint to produce it is 20% greater than burning conventional fossil fuels.

Still, the H2Hub Program intends to produce clean hydrogen in the United States. In Pennsylvania, the plan is to produce “clean” hydrogen by continuing to frack natural gas and separate the hydrogen from the collected methane while employing CCUS technologies to capture the leftover carbon dioxide. This is a bad choice for Pennsylvania because blue hydrogen is not clean. Plus, it is predicted that “green” hydrogen – which uses renewable energy to produce the hydrogen – will be cost-competitive with blue hydrogen by 2030. This H2Hub that is supposed to transition Pennsylvania into its clean energy future is just a way to ensure 1) we are dependent on the fossil fuel industry for decades to come, and 2) that we waste taxpayer dollars on that dependence.

Taxpayers to Pay More Subsidies to the Oil and Gas Industry

This H2Hub will come with a cost to taxpayers. Pennsylvania House Bill (“HB”) 1059 was signed by Governor Wolf on November 3, 2022, after it was amended at the last minute without community input to include billions of dollars in tax credits to several industries, including milk processing, semiconductor manufacturing, and biomedical research and manufacturing. However, most of the tax credits in the bill relate to purchasing natural gas either for use in the manufacturing of petrochemicals or fertilizers or at an H2Hub.

Our elected officials are giving up to three operators tax credits totaling up to $56,666,668 a year for purchasing natural gas to manufacture petroleum products. Each operator can receive a $0.47 tax credit for each unit1One thousand cubic feet of natural gas at a temperature of 60 degrees fahrenheit and an absolute pressure of 14.73 pounds per square inch. of natural gas purchased and used for this purpose. The tax credits apply to the purchase of dry natural gas between January 1, 2024, and December 31, 2049, for a total of $1,416,666,700 in tax credits. This is the most significant chunk of tax credits present in the bill.

An additional $50,000,000 in tax credits will be made available every year to subsidize an H2Hub in Pennsylvania. Up to two operators can receive a $0.47 tax credit for each unit of natural gas (see footnote 1) purchased and used at the H2Hub and/or an $0.81 tax credit for every kilogram of clean hydrogen purchased from a Pennsylvania H2Hub and used in manufacturing. The credits begin January 1, 2024, and end December 31, 2043, for a total of $950,000,000.

In total, $2,366,666,700 in tax credits will be dealt out over the next 25 years to ensure that the fossil fuel industry maintains dominance over our economy, and our elected officials dealt out this money behind closed doors. Pennsylvania deserves better than deals made behind closed doors without community input. We deserve a say and a future that runs on clean energy.